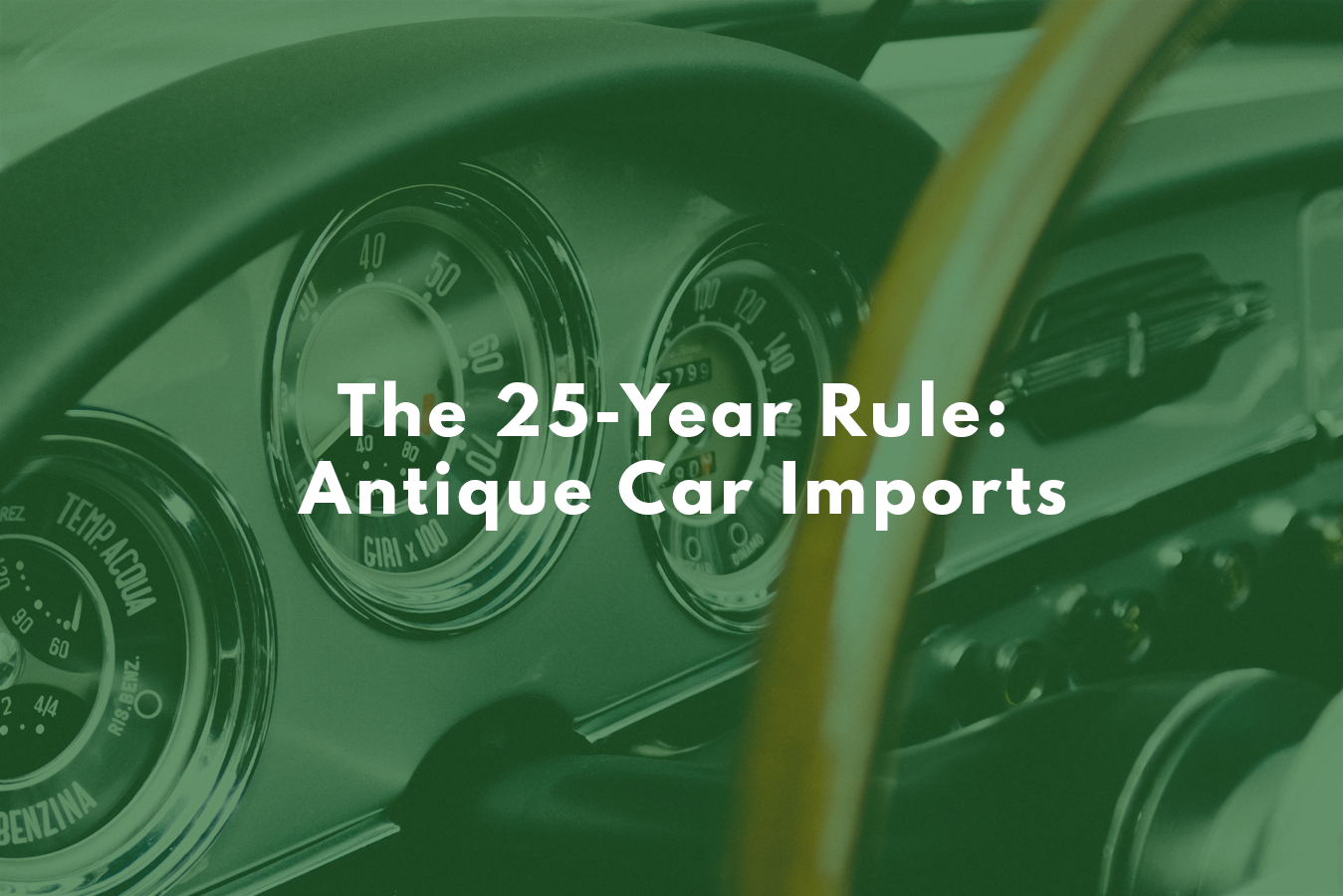 The Mitsubishi FTO. The Subaru WRX STI. The Opel Tigra.

Beyond being cool cars, these models — and a slew of others — have something in common: they’re only becoming eligible to import this year. This is thanks to a legal clause known as the 25-year rule, which states that certain makes and models of car that would have previously not been certified for import or use in America can now be imported as antiques. They are no longer subject to the regulations that had previously been keeping them out of the country.

For antique car collectors, the 25-year rule opens up a new selection of cars each year that had never seen mass importation to the United States—but how does it work? And moreover, why does the 25-year rule exist at all?

Origin of the 25-Year Rule

The 25-year rule is relatively new, and it didn’t come about the way you might think — cars over 25 years old were never the original focus of the act.

Prior to 1985, the United States had a thriving grey import market for foreign vehicles. Drawn to a wider selection and possible cost savings, Americans imported a whopping 60,000 grey market cars in 1985 alone. Unlike today, these cars didn’t need to meet a 25-year rule—and they were often unsafe and could even be outright fraud.

Mercedes, concerned about the safety of grey market vehicles, ran its own experiment. They purchased a grey market car purported to be a 1985 500 SEL with airbags — what they received was a 1984 model (fraud), devoid of airbags (unsafe), with extra parts added dangerously and haphazardly to pass it off as updated for compliance to be sold in the United States (very unsafe!).

Unfortunately, this experience was not uncommon. For every one conversion shop dedicated to ensuring grey market cars were safely updated to comply with American law, there was another that focused on pumping out as many conversions as possible through shady methods.

The public safety risk grey market cars posed was deemed too high. In addition, American car manufacturers were starting to get uneasy with the way imported cars cut into their profits. They were losing money on cars they couldn’t ensure were safe.

In 1988, the Imported Vehicle Safety Compliance Act was put into law to address these concerns. It essentially bans the personal import of any foreign vehicle not intended for the American market. Written into the act is a provision for vehicles over 25 years of age, reinforcing that cars over 25 years of age are classics and antiques. The 25-year rule represented a compromise: collectors could still have their cars, but the average American was going to need to buy something the government and manufacturers could assure was safe for American roads.

How to Import Newly Eligible Cars

Now that you know why the 25-year rule exists, let’s look at how you use it.

First, it’s important to note that the 25-year rule is federal. Different states might have their own laws that you’ll need to comply with. California car collectors, for example, have to contend with additional regulations that extend to any vehicle produced after 1975. Before you import your chosen car, check your state regulations — you can contact us anytime you need import consultation.

Second, while there is a 21-year Environmental Protection Agency (EPA) compliance exemption that must also be followed, it doesn’t extend to all kinds of vehicles. There are individual EPA regulations for:

If your desired antique car is over 21 years old, younger than any additional EPA regulations, and unmodified — or modified, but with an EPA compliant engine — you’re ready to move to the next step: is the car 25 years old?

Once you’ve got your proof, it’s time to import! There are two forms to fill out, the EPA form 3520-1 (make sure you declare code E) and the DOT form HS-7. As your customs experts, we’re ready to help and make sure you have all the forms and documentation in order. We’re fans of classic cars and are always there to help you bring the latest approved models across the border.

What You Need to Know About Exclusions & Absolute Quota: Section 232