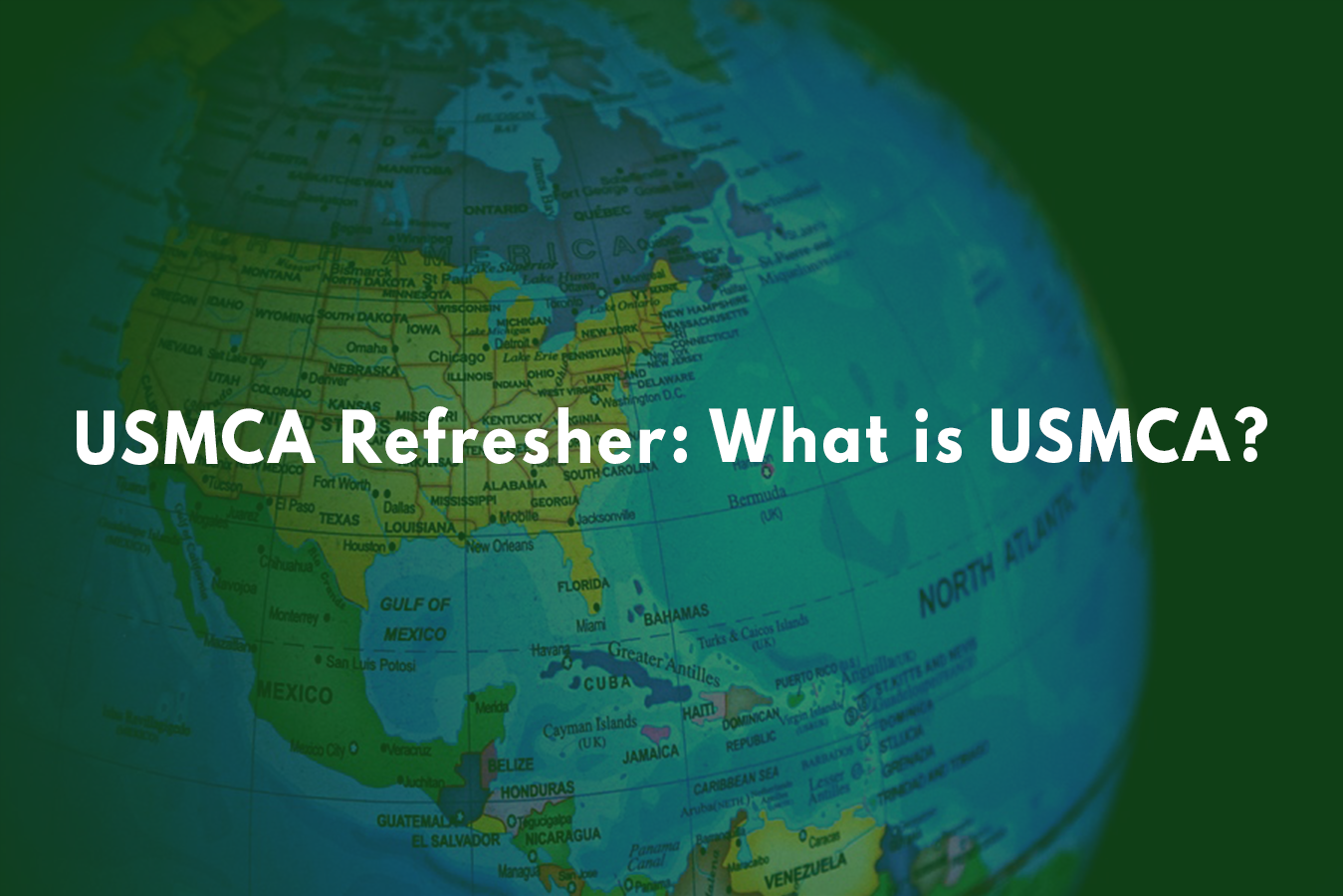 USMCA Refresher: What is USMCA?

The USMCA Story So far

Up until recently, NAFTA (North American Free Trade Agreement) was the trade deal that Canada, Mexico and the United States jointly agreed upon. NAFTA was fully established in 1994 with the goal of eliminating trade barriers and encouraging investments between the three countries. The pros and cons of NAFTA had been criticized from the very beginning, with various concerns and doubts being raised by economists, trade specialists and the public. The discussion came to a head shortly after President Trump was elected. Trump had been vocal in his criticism of NAFTA, and renegotiation efforts were one of the hottest topics of 2018. Canada and Mexico were also engaged in the highly publicized negotiations. In 2018, the leaders of each country met the G20 Summit to sign a new agreement to replace NAFTA. The deal is called USMCA, or the Canada–United States–Mexico Agreement.

The three countries now need to officially implement (“ratifying”) the deal within their own markets. In June 2019, Mexico became the first of the three countries to officially ratify USMCA. Canada and the U.S are still in the process. On the Canadian side, the tabling process is lengthy and the Trudeau government is effectively waiting until the U.S. has ratified their side of USMCA.

In order for USMCA to come into effect in the U.S., certain TPA procedures, including a Congressional vote, need to be completed. Since the G20 summit, political conflict within Congress has slowed down the USMCA ratification process. Democrats have raised concerns about the agreement in its current form, and want it to include stronger protections for workers and the environment. There has been significant progress during internal meetings and many are confident an agreement will be reached before the next election.

What USMCA means for American citizens

Until USMCA ratification, NAFTA is still in place. But since the terms of USMCA have already been agreed upon, we have a pretty good idea of what will happen when it finally happens. A trade deal between two or more parties allows them to agree on a common framework for  import laws, duties, taxes, and tariffs on the goods that are sold between them. This means USMCA will inevitably have benefits and drawbacks for each country involved. You can find a USMCA summary on the USTR website. We’ve gone into detail on some of the USMCA highlights and what they’ll mean for you.

In order to avoid tariffs, 75% of the parts used to make a vehicle must be sourced from one of the three North American countries. Previously, the requirement was 62.5%. This change is meant to discourage manufacturers from cost-cutting by purchasing cheaper materials outside of the North American market. Additionally, 45% automobile parts must be made by workers who earn at least $16 an hour by 2023. This will discourage car manufacturers from seeking out cheap labour.

However, the ITC also expects a modest increase in vehicle costs of around 1.61%. Vehicle consumption in the U.S. could fall by 140,000 vehicles per year. Additionally, it could be very complicated for manufacturers to find all the parts they need in one market. The 75% rule could backfire if companies decide the 2.5% penalty tariff on non-qualifying cars is worth it.

Overall, USMCA is expected to boost the auto industry in the U.S. According to LevaData, 78% of top auto manufacturing executives believe that USMCA will have a positive impact on the auto industry business. You will likely see the cost of cars increase, but some production will shift out of Mexico and into the U.S., creating more jobs for the American population.

In May 2018, the U.S announced a tariff of 25% on steel imports and 10% on aluminum imports coming from Canada and Mexico. During the heated exchanges between the two countries the U.S. cited national security threats as their reason for the tariff. Canada and Mexico rejected the justification, and then implemented their own retaliatory tariffs. On the Canadian side, levies on U.S. pork and dairy products were put into place.

Canada exports 76% of the steel it produces to the U.S, so these unprecedented tariffs had a significant impact on their industry. Canada and Mexico both said they would not continue with USMCA negotiations as long as the tariffs were still in place. In order to reach an agreement on USMCA, the U.S agreed to remove the tariffs.

Overall, removing the 25% steel tariff on Canada and Mexico was necessary. This move allowed the USMCA bill to be signed, and opened up opportunities for the U.S in the North American dairy trade. You might not see a direct impact on your wallet from any UCSMA related changes. However, a 25% tariff on steel imports from China remains. Find out about this in our blog on the U.S. trade war with China.

The USMCA negotiations settled the longstanding dairy dispute between the US and Canada. Put simply, the U.S. produces a kind of dairy product called ultrafiltered milk which is largely used only in Canada. Ultrafiltered milk was not yet developed during the original NAFTA agreement, so it entered Canada duty-free.

In 2016, the Canadian Government developed a new class of dairy called Class 7 which included the ultrafiltered milk and other high protein dairy products. Canada uses a supply management system, so they were able to place a lower price on Class 7 products. Canadian dairies could then offer these more cheaply than the U.S dairies to dairy processors. The U.S dairy exports to Canada sharply declined. President Trump had been vocally against the Canadian dairy practices for some time, arguing that they unfairly locked U.S. farmers out of an important market.

Canada agreed to open their market and eliminate class 7. This will allow dairy producers in the U.S. to have unimpeded access to 3.5% of the Canadian dairy market.

Overall, U.S. dairy farmers will be able to export an additional 100,000 tons of dairy to Canada. The U.S. dairy industry is facing an overproduction issue, so the removal of the high tariffs offers a small amount of relief to American farmers.

Digital trade marks a major difference between NAFTA and USMCA. When NAFTA was negotiated in 1994, businesses and consumers did not rely on the internet nearly as much as they do today. NAFTA was never intended to deal with the implications of digital trade. Today, digital trade is an important factor in our economy and a daily part of most American lives. Online shopping, streaming services, and social networks like Instagram and Twitter are all part of digital trade.

Under USMCA, there are several new and major provisions for this sector. For example,  internet companies cannot be held liable for the content their users create. Extra duties beyond sales tax are prohibited on music, e-books, videos and other digital products that are transferred across borders. New data localization laws mean businesses cannot be required to store data domestically.

Overall, the average American public may not notice the benefits of this particular industry. Many of the changes only fortify rules and regulations that were already adhered to. Despite this, the digital trade provisions are pretty important as there was nothing unifying the three countries on cybersecurity, spam prevention, consumer protection under NAFTA.

Copyright laws are different in the U.S., Canada, and Mexico, and this will continue to be the case. However there are several new provisions that the three countries will all conform to.

The copyright on an author’s intellectual property has been extended from 50 years after their demise to 70 years, meaning a work will be protected for an additional 20 years after the creator has passed. In the drug field, protection on patents has been extended to 10 years. Once a new drug or medication has been developed, generic versions of the drug can’t be produced until the protection period has finished.

Overall, content creators and authors may find this in their favour, as their works will stay out of the public domain for even longer past their death. However, works will be restricted from the public domain for longer than before, potentially increasing educational costs by forcing schools to pay for the old materials. Cheaper generic alternatives on medications and drugs won’t be available for a full decade after the drug has been developed.

The terms can seem daunting, but the USMCA trade deal has not changed most parts of NAFTA that Canada was comfortable with. Many within Congress feel that USMCA does not do enough to improve on NAFTA, so negotiations within the U.S. continue. There is also a 16 year Sunset Clause — meaning that after 16 years the terms of the trade deal expire and new ones will be made. Additionally, the USMCA trade deal will be reviewed every six years. These clauses ensure that the U.S. can renegotiate based on the needs of the country. Americans can expect industries to benefit from many parts of USMCA, especially the auto industry, and will feel some of these benefits themselves.