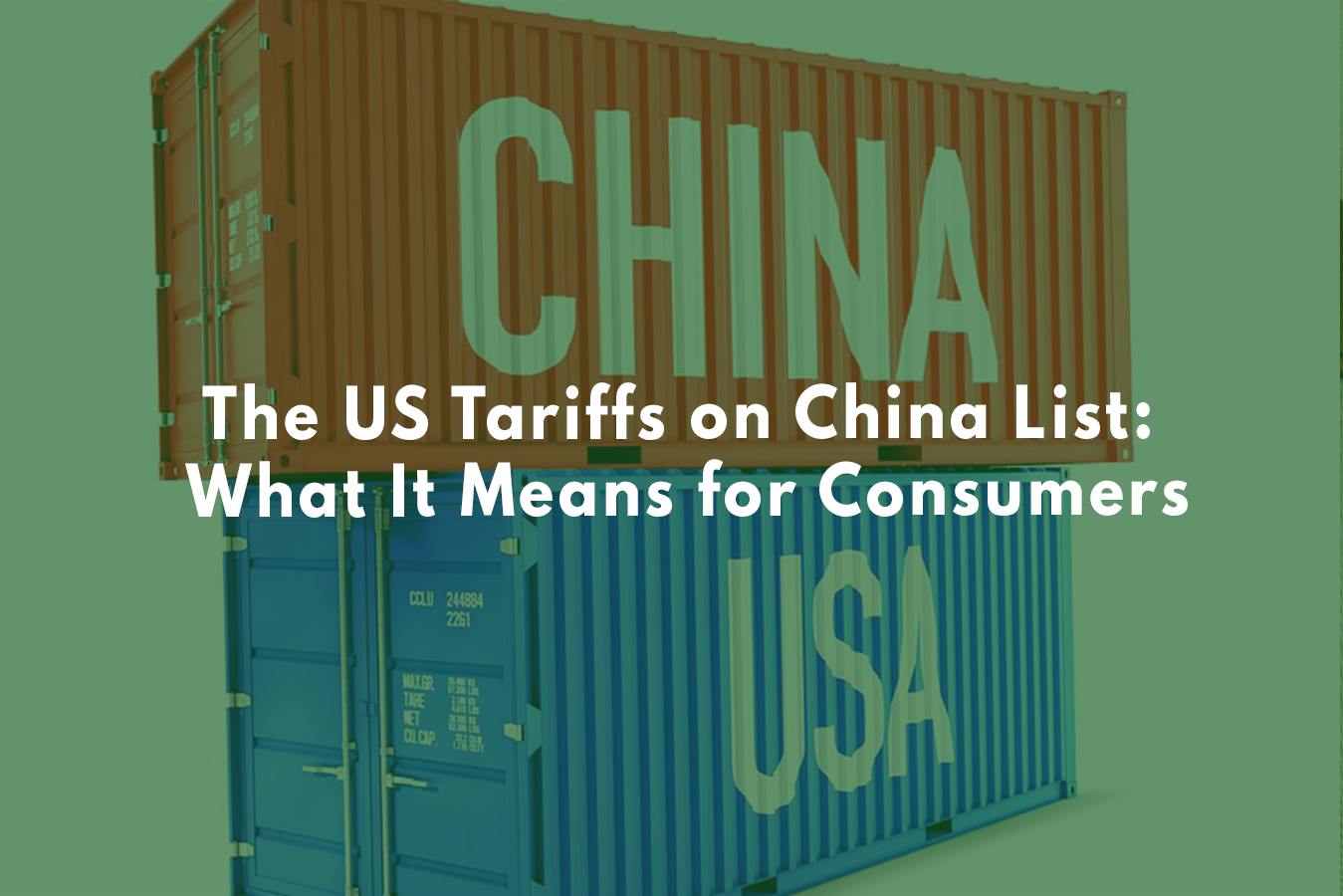 The US Tariffs on China List: What It Means for Consumers

A hot topic in the news these days is the trade relationship between U.S. and China. It’s an interesting, if not slightly troubling, time for global economists, investors, importers and retailers. There are currently high import tariffs from China to the U.S., and vice versa. For Americans, importing from China is very expensive. Because the U.S. and China are the two biggest economies in the world, people all over the globe are paying attention. These kind of tariffs on imports and subsequent retaliations are often referred to as a trade war. This largely impacts big companies and importers, and the effects then trickle down to the consumer. We’ll outline what these recent trade developments mean for the average American consumer.

Why are Import Tariffs from China to the U.S. Increasing?

Both countries have placed tariffs on each other. What are they fighting about? It’s pretty complicated! Politics have a lot to do with it, but we’re putting that aside and approaching this issue from a trade standpoint so we can help you understand what it means for your wallet.

In 2017, the U.S. examined China’s trade policies and decided that the amount of items being purchased by the U.S. compared to the amount being sold to China was too high. This is called a trade deficit. The U.S. imposed billions of dollars of tariffs on imports, and China retaliated by doing the same. There were negotiations and some improvements, but ultimately the two countries failed to reach a resolution. Then, in May 2019, President Trump increased import tariffs from China to the U.S. to 25% on over 5,000 Chinese products.

What Does it Mean for American Consumers?

The companies or manufacturers who import tariffed products from China must now pay up to 25% of the unit price to do so. When tariffs on imports are imposed, the prices that manufacturers are used to paying go up. They then have to make the decision of taking the loss or passing that cost on to their customers. In some cases, the cost of household items goes up. Here’s a brief outline on some of the changes Americans shoppers can expect to see.

Which industries have been hit?

In May 2018, the President announced a 25% tariff on imports of steel, and 10% on aluminum. During UCSMA negotiations, those tariffs were lifted from Canada and Mexico. They remain on metals imported from China. The U.S. has seen some positive stimulation in their own steel industry as a result.

However, the U.S. cannot produce enough steel to independently fill its demand. Steel imports will likely always be a reality for the U.S. While the U.S. gets most of its imported steel from Canada, many companies rely on cheaper Chinese steel to some extent. Costs are expected to rise for US manufacturers, particularly in the automobile, motorcycle and aircraft industries, as they will now be forced to buy more expensive steel.

Another industry to take a hit is agriculture. The U.S. Department of Agriculture expects farm exports to drop $1.9 billion to $141.5 billion in 2019. Wheat and corn values have also plummeted, though not as badly as soybean. Until 2018, the U.S. was the largest soybean exporter to China. After the U.S. placed tariffs on China, the Chinese retaliated with a 25% tariff on American soybeans, one of the most devastating import tariffs from China. Soybean farmers all over the U.S. have suffered, with prices dropping from 10$ to 8$ a bushel and a large stockpile of unsold produce. The U.S Government is offering a $16 billion bailout to American farmers.

China has made a few soybean imports here and there to support trade negotiations, but in the long run the imports to China have slowed substantially and almost stopped entirely in states such as Indiana. China quickly began importing soybeans from South American markets like Brazil and Argentina, while encouraging domestic growth of their own soybean farming industry. Archer-Daniels-Midland, a major global food trading corporation, predicts that this trade war will change the way China buys soybeans forever.

Some businesses have been largely spared from the tariff increase so far, such as the apparel and cellphone industries. These two are heavily sourced from China. However, the Government is threatening another $300 billion tariff hike on consumer goods from China. Consumers could see some huge cost increases if this happens.

Here are some products that have already been affected by the tariffs.

Ford lost $1 billion in profits last year. Polaris, a motorcycle maker, stated the tariffs would cost them $195 million to $200 million. Deere and Caterpillar (CAT), which make farm equipment and tractors, hit red last year, citing reasons such as high steel costs and lower spending from struggling farmers. Caterpillar’s production costs increased by more than $100 million last year, stating that they were forced to pass the cost on the consumers. Ultimately, this could cost the American consumer an extra $1,900 for a U.S. built car and $3,700 for an imported car, according to the Center for Automotive Research.

The Auto Care Association, which represents 150,000 manufacturers, has said that car ownership could go up $700 a year. This would be due to the rising price of auto maintenance. An insurance coalition – composed of the American Insurance Association, the National Association of Mutual Insurance Companies and the Property Casualty Insurers Association of America – says that higher tariffs on imported auto parts could increase auto insurance costs by 2.7%, or $3.4 billion annually.

The price of many every-day home appliances have increased. Washing machine prices have gone up by 12% since 2018, largely due to the steel tariff. The median price for a washing machine before the tariff announcement was $749, according to researchers from the Federal Research Board, University of Chicago, and the National Bureau of Economic Research. The tariffs added $86-$92 to each unit.

Initially, this actually allowed U.S. appliance maker Whirlpool to compete with the prices Chinese manufacturers used to offer. However, Korean manufacturers like LG and Samsung have also jumped on the opportunity by opening plants in the U.S., which is good for American jobs but not so much for American companies like Whirlpool. Additionally, the steel tariff (which came after) made operating costs higher for all appliance makers in the U.S.

Around 82% of the luggage sold in the U.S. is imported from China. Since the beginning of 2019, prices for luggage increased between 5% and 10%, and are projected to increase 10% to 15% more. When the first 10% tariff was announced, many retailers bought luggage in bulk. The tariff is now 25% and the stockpile is running out, so consumers can expect a sudden rise in these items. Backpacks and handbags are affected as well.

About half of the bags and luggage sold in the U.S. are from Walmart. Walmart may have the capacity to maintain consumer costs or at least limit the increase. The other half comes from small or specialty retailers, who probably won’t able to do that. Americans can expect to spend a lot more on items like this.

The house building industry has also taken a hit from the tariffs. According to the National Association of Home Builders, $1 billion has been added to the costs of housing construction. They warn it could jump to $2.5 billion with the recent increase in tariffs.

There are U.S. tariffs on Chinese materials such as granite, vinyl, flooring, ceramic and course steel. The actual cost to consumers in this case is hard to quantify, as the housing market fluctuates depending on location, demand, and mortgage rates. Home-builders or those renovating will see the most of the increases.

There are 5,745 goods on the U.S. tariffs on China list. You can read a full list from the United States Trade Representative (USTR). There are 194 pages to comb through, so here are some highlights.

American consumers do not need to panic. Though these tariffs sound scary, there are ways of managing them. You as a consumer have choices. If you support the tariffs on imports from China, you may decide to opt in on some of these price increases. You can also make efforts to buy American products as often as possible. Buying American is important to many people. If that’s you, do your research and buy products that are fully American. Often you’ll end up paying more, and it can be tricky for some items, like electronics, so you can agree to pay the mark-up on products with parts sourced from China instead.

You can also choose to limit spending during this time. It is estimated that the average American household will pay a mostly unavoidable 800$ a year more with these tariffs in place. For many American families, this increase could be impactful. You may choose to refrain from major purchases that aren’t a necessity. Though change is coming more slowly than anticipated, trade analysts and Government officials expect future negotiations to resolve some of these tariffs. That means you may be able to get that new flatscreen TV next year for a lower price.

In our next blog post, we’ll cover how the tariffs on imports from China will affect importers. If you happen to be a consumer, small retailer or someone who is regularly importing from China, we’re here to help. Get in touch with us and we’ll clear up any import or export questions you have!