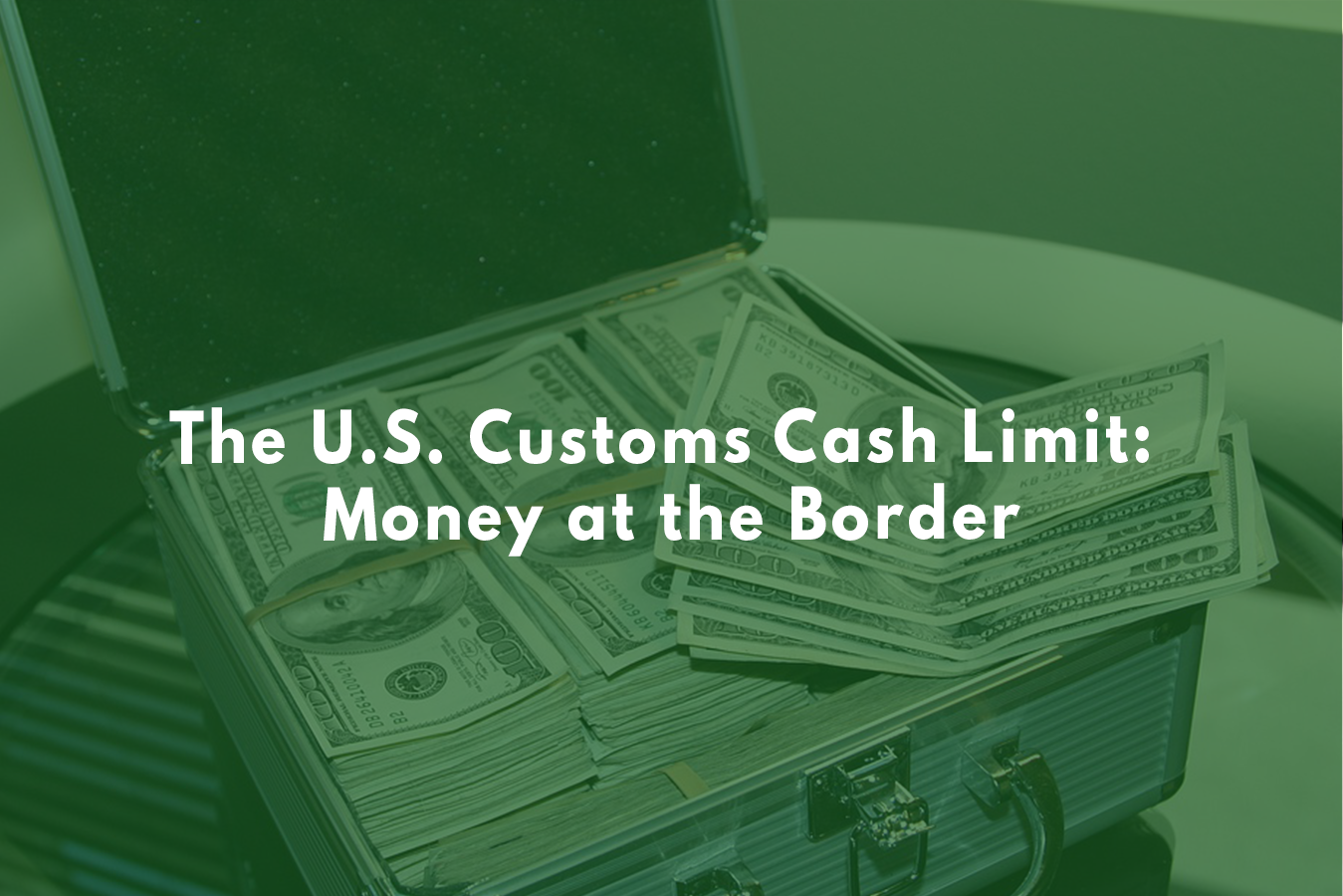 The U.S. Customs Cash Limit: Money at the Border

When traveling, it makes sense to many people to carry some cash on them. You never know when you’ll encounter a vendor who doesn’t accept debit or credit. Other times, travelers may choose to exchange their money to foreign currency before they leave. Whatever the reason, traveling with cash is a pretty normal thing to do. But did you know that there’s a U.S. customs cash limit?

Most countries have laws about how much cash you can cross their borders with. The United States is no different. The point of the U.S. customs cash limit is to catch criminals and prevent money from being used to fund illegal activity like money laundering or drug trafficking.

Unfortunately, travelers who are otherwise law-abiding citizens sometimes get caught illegally traveling with too much cash. Often, these travelers are unaware of the laws but ignorance is not accepted as an excuse. The best way to avoid a nasty surprise at the airport is to be informed and knowledgeable about what you can and can’t bring over the border.

How much cash can you carry legally?

You might be surprised to learn that there is no limit on how much cash you can cross the border with. However, if you travel with more than $10,000 USD then you must declare it. You can find the official statement on this at the US Customs and Border Protection website.

If you bring more than $10,000 USD you have to notify customs and fill out a Report of International Transportation of Currency and Monetary Instruments (FinCEN 105).

It’s very important to know that this means any form of cash that equals $10,000 USD. Any combination of “cash” items (more on this later) and foreign currencies counts towards your total amount. It’s your responsibility to understand this and to verify conversion rates before attempting to cross the border.

For example, a euro is usually more than a U.S. dollar. Attempting to cross the border with €9000 EURO would likely exceed the U.S. customs cash limit of $10,000 USD. In this case, bringing money into the U.S. would require a declaration, as would leaving the U.S.

Here’s another example. When crossing the Canadian border, anything over $10,000 CAD must be reported. Now, this is where people can get tripped up! If you forget that $10,000 USD usually exceeds the value of $10,000 CAD and don’t declare it, you might get caught in a secondary inspection with too much cash and face penalties.

It’s also important to know that different countries have their own laws on traveling with cash. You’re responsible for knowing the laws of the destination you’re traveling to. You may be able to leave the U.S. with $10,000 USD but that does not necessarily mean you can enter another country with that amount.

Keep in mind that conversion rates change daily, so be sure to check and make sure you are aware of how much cash you’re actually traveling with according to the countries you’re entering.

What counts as cash?

Some travelers are caught unaware because they don’t realize that paper and coins are not the only thing the CBP considers cash. To put it simply, anything that can be reasonably used to purchase something is considered cash. This includes:

Traveling with any combination of these is not exempt you from the law and is not a “loophole”. If you travel with $5000 USD in banknotes and $6000 USD in checks, you must declare the full amount of $11,000 USD.

Likewise, splitting up the amount you’re traveling with will not exempt you from the declaration requirement either. If you have $5000 USD and your travel partner has $6000 USD, you must declare $11,000 USD in a joint declaration.

What happens if you don’t declare at customs?

Failure to declare monetary instruments in amounts valued more than $10,000 can result in its seizure.

If you are caught crossing the border with any amount of undeclared cash in excess of $10,000 USD you will almost certainly have it seized from you. There are other penalties associated with carrying too much cash across the border, as well.

According to the CBP, there are circumstances in which a fine up to $500,000 dollars could be given. Failure to file a report (declaration) or filing a report with incorrect or missing information could lead to imprisonment of up to 10 years. If you have your cash seized, you can seek legal counsel. It may be possible to recover the cash, but expect a thorough and lengthy legal investigation.

There are a variety of ways that the CBP can detect cash in your luggage. Believe it or not, detection dogs can smell paper banknotes. The CBP also uses various x-ray technologies and fiberoptic scopes to scan luggage and vehicles. Trying to hide cash is not worth it.

If you are not engaged in criminal activity, there isn’t really a reason to purposefully evade the CBP. Some people do this unknowingly, while some do it simply because they don’t want to be bothered with questioning. Don’t make this mistake! You might be surprised to learn that in 2018 an average of $290,411 USD in undeclared or illicit currency was seized by the CBP every day. That’s a lot of money!

There was also a case in Canada in 2013 where fluctuating exchange rates caused a man to have his funds seized. In this situation, the man carefully calculated and was carrying just under $10,000 CAD. However, by the time he reached the airport two days later, the exchange rate tipped his combination of USD and CAD dollars to over $10,000 CAD. Sniffer dogs detected the undeclared cash and the CBSA seized the total amount from him.

In this case, the man was also suspected of criminal activity. However, this story is a good example of why you need to be totally aware of exchange rates and how much money you’re carrying. Additionally, if you’re worried you might be toeing the line, it can be a good idea to declare your cash even if you’re feeling unsure of whether it goes over the U.S. customs cash limit or not.

You won’t be penalized if the amount is under $10,000 USD, and there are no duties or taxes when crossing the border with cash, so the only thing you’ll lose is a little bit of time at the airport.

At the end of the day, most people prefer not to travel with an excess of $10,000 USD on them. Carrying that much cash makes you a target for theft. It could also really affect your finances if you lose your luggage in transit and your cash along with it. If you do need to do it, though, be sure to properly account for the total value of all currencies you’re carrying and then declare it. If you’re wondering about other sensitive items you may want to cross the border with, check out our blog on getting through customs.

If you have any more questions about crossing the border with cash or how to fill out a customs declaration form, don’t hesitate to get in touch with us. We’re ready to answer those and any other questions you have about importing and exporting. At Clearit, we’re in your corner.