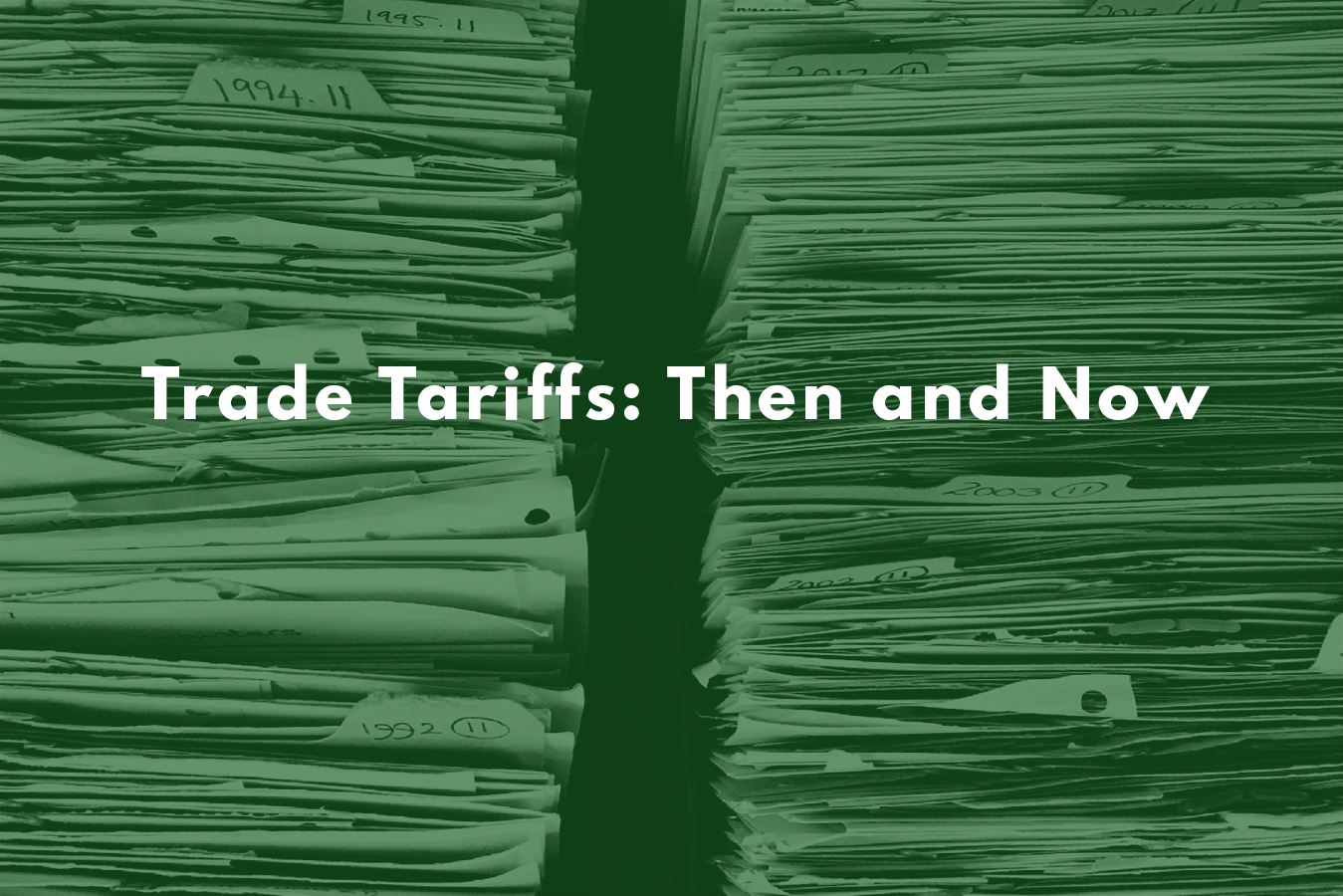 Trade Tariffs: Then and Now

For as long as the U.S. has been a country, there have been tariffs — but the motivation behind the tariffs was a little different back then from what you see now. The country was in its infancy, so when the U.S. Congress passed the tariff act in 1790 to create a 5% flat rate tariff on all imports, it was explicitly to balance out years of British rule and monopolization of material goods.

And that percentage has fluctuated ever since, going from 25%, 50%, and even 100% at one point in U.S. history. The cause of these increases has always varied. Trade tariffs have increased for a number of reasons in the U.S. — World War 1 and 2, civil strife, protecting infant industries and jobs, and even inciting trade wars. But they have also decreased over time, as the world opened up and free trade became a major talking and action point for leaders across the globe.

So what happened after the initial creation of a tariff policy by Congress over 200 years ago, and what’s in store for the future of international trade concerning the U.S.?

After the War of 1812 concluded in 1815, the U.S. adopted a number of trade tariffs and policies.

Tariffs rose as high as 30% on material goods from cotton to glass. Americans wanted to industrialize, as well as hurt their former foes on the battlefield. But it also started a wave of protectionist mentality in the U.S. — people in government or otherwise wanted to protect American industry, grow the economy, and pay off their debts.

By the time the 1857 Tariff Act rolled around, tariff rates had risen to a high of 50% and then dropped down to a low of 20%. The exact specifics were continuously changing as government officials dabbled with different percentages in order to find the right one for steady economic growth, and find a number that wouldn’t pose serious problems to employment rates.

They settled at 20% in 1857, but that didn’t last long. According to economist Frank Taussig, these tariff rates never achieved their desired impact on the population. If the U.S. wanted to promote domestic industry with these tariffs, it was not done successfully.

For the rest of the 19th century and well into the 20th century, the U.S. held the highest tariff rates of any country in the world. No tariff more impactful, and controversial, than the Smoot-Hawley Tariff in 1930. Dutiable imports saw their rates rise to levels not seen in over 100 years, and it’s widely considered the catalyst behind the Great Depression.

Protectionist tariffs continued to push the country into the forefront of economic superiority at the time, but that changed at the end of World War 2. The U.S., along with many developed countries across the globe, recognized the need for a more liberalized trade model which led to free trade deals.

Present day: free trade with a side of tariffs

When the Second World War ended, the U.S. introduced the General Agreement on Tariffs and Trade in an effort to help reduce global tariff rates and promote free trade on a global scale.

This revolutionary move by the American government has primarily been the backbone of international trade. Countries, developed or developing, have reduced tariff rates over the last couple of decades. In Asia, Europe, and North America, countries have established free trade deals to allow the free flow of material goods as industries and governments are realizing that tariffs don’t always incite an increase in domestic industrial productivity.

International organizations, like the World Trade Organization, have been created to maintain and improve free trade. The WTO and other organizations keep unfair competition to a minimum and help keep tariffs at a reasonable level. Because of their efforts, the world has entered an era of globalized economics.

Of course, there are still tariffs that get imposed by governments when countries believe they need to protect a certain industry. It’s one of the few valid reasons why a country would impose new tariffs or taxes on trade goods.

According to Investopedia, other reasons include:

But while these reasons will continue to be acted on in the present and future when absolutely necessary, the general consensus is that relatively free trade should — and will — remain in our foreseeable future.

While free trade is the ultimate goal for the WTO, countries still find themselves engaging in tariff activities, be it to try to resolve a trade dispute or simply to cope with rapidly globalized economics. Some new, and old, tariffs have surfaced recently, but this shouldn’t deter importers from engaging in trade, especially if they have the help of a content broker to navigate the system.

Stay on top of free trade agreements, tariffs, and tax increases with your local customs broker. Contact us today to find out how a customs broker can keep you in the loop in global trade affairs, while saving you money in the process!