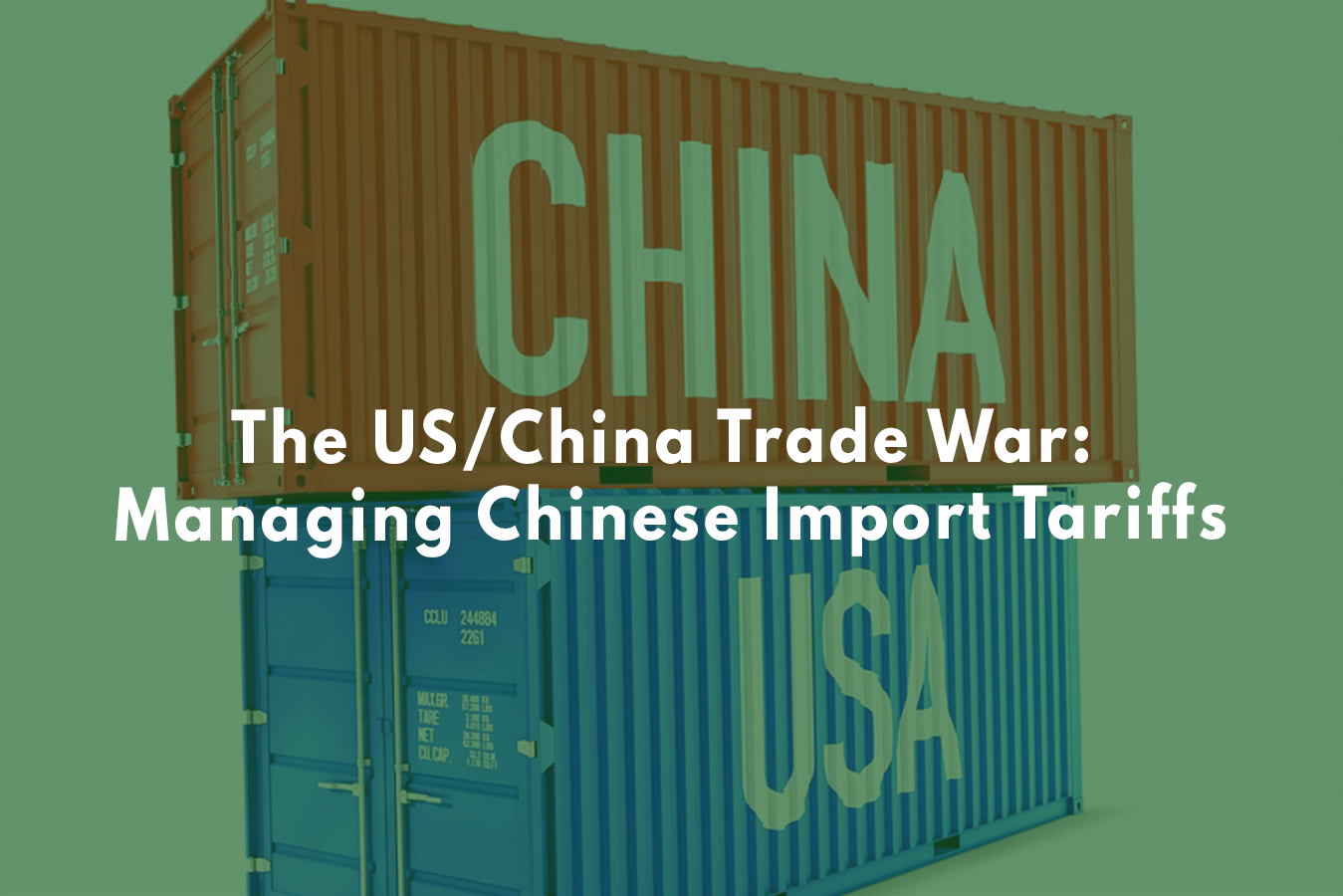 The trade relationship between the U.S. and China has been heating up for over a year. Currently, both countries have placed high import tariffs on each other. China and the U.S. are the two biggest economies in the world, so people all over the globe are paying attention. In part one, we gave a brief summary and background on the issue. We also explained how the Chinese import tariffs will affect the wallets of everyday Americans. In part two, we’re going to focus on how importers themselves can manage the high U.S tariffs on imported good.

In 2017, the U.S began looking at China’s trade policies and their shared trade relationship. The Government concluded that the amount of Chinese goods being imported compared to the amount of American goods being exported to China was too high. In addition to political motivations, the U.S. introduced high import tariffs in an effort to reconcile this trade deficit. China retaliated by placing similarly high tariffs on U.S. goods. Despite lengthy negotiations, a resolution has not been reached. In May 2019, President Trump increased Chinese import tariffs to the US to a whopping 25%.

Companies and manufacturers who source their materials from China now face a 25% tariff on many of the products they regularly import from China. U.S tariffs on China mainly affect importers, who then must decide whether to eat the cost, find new suppliers, or pass the cost on to their customers. For most, none of these options are ideal.

Giant manufacturers and retail corporations, such as Walmart, can manage these issues by adjusting their supply chains or increasing retail costs without losing clientele. Other American retailers, such as Ford and Whirlpool, have seen their costs increase as well and have had to pass them on to consumers.

If you’re a small manufacturer though, you’ll want to know what you can do to manage your import costs during the U.S./China trade war.

The first step you can take without making any actual changes to where and what you import is a re-evaluation of your classifications. You should already be doing this regularly, but now is a particularly important time. Could you be leaving money on the table by not classifying your imports and exports properly? In our blog on customs compliance, you can learn more about properly classifying your goods. While some classifications are obvious, others can be tricky. You’ll need someone versed in tariff schedules and customs compliance training. If you’re unprepared, this is something a customs broker can help you with. Get in the habit of regularly conducting self audits, and start today to see if you could be saving some money on your Chinese imports.

Change your product
While this can be frustrating, it’s possible that you could save a big amount of money by making a small variation in design. Perhaps you order wholesale leather goods from China. Could you make your product with a different material, or simply omit the leather altogether? Finding a way to replace or remove the Chinese imports you currently use is something to consider.
You can also redesign your product.Tom Gould, a trade law specialist at Sandler, Travis & Rosenberg, says companies are using a strategy called “tariff engineering” when designing products. Believe it or not, something as simple as adding pockets or drawstrings below the waist of a shirt can make the import tax drop from 15.4% to 8.1% for cotton and  26.9% to 16% for polyester.

Find alternative sources
You can consider importing goods from countries other than China. This is the solution many importers are turning to, and perhaps the most important suggestion we have. With some materials, it’s not possible to simply replace or omit them. If you’ve been importing electrical components, for example, chances are your product can’t simply be redesigned without them.
American importers are turning to other countries en masse. South Korea, Taiwan, and Vietnam have seen a boom in their exports since the Chinese import tariffs were implemented. Imports from other Asian countries have increased by $30 billion, while Chinese imports have declined by $75 billion.

Apply for duty drawbacks
It may not be feasible to stop importing from China. For example, Columbia Sportswear has been able to cut their overall production in China by 60%, but they produce certain styles of shoes that require complicated machinery only available in Chinese factories.

If you face a similar problem, you should definitely be looking at duty drawbacks. Commodities subject to Section 301 tariffs are still eligible for duty drawback claims. Essentially, these entitle importer/exporters to a refund on the duties they have paid. This works within certain parameters and conditions, but it’s likely that you can benefit from them if you regularly import and export. Read our blog entry explaining the duty drawback system in detail to know more.

During this transition, many companies are looking for loopholes. Importers should proceed with extreme caution when heading into this territory. This is something your customs broker or lawyer can help you with. There are certain legal loopholes that can benefit you, but we do not recommend any manipulation or abuse of them.

Shipments are not fully liquidated for 12 months after clearance, meaning you can expect a routine or targeted audit at any time during the year following the import. The U.S Government has already fined several companies for dodging Chinese import tariffs. If you want to avoid punitive measures in the future, it’s better to stay away from illegal tariff dodging.

What you can do:

De Minimis Value: Imports under $800 won’t have duties applied to them. If your orders are small, you can save on duties. However, some companies are breaking up their orders and sending them to different ports to take advantage of this. Such practices could lead to legal trouble in the future.

Keep Stock Low: You may benefit from De Minimis by keeping orders small, but you’ll also want to do this in order to capitalize on any tariff changes. With Chinese tariffs rates reaching 25%, you should keep your stock low and order only what you will need in the immediate future. Keeping stock low will justify your use of the De Minimis.

What you should not do:

Misclassify: A big issue right now is the misclassifying of imports. Many companies are deliberately misclassifying their imports to avoid the Chinese import tariffs. This has always been illegal, and there are hefty fines associated with customs compliance failure. However, the U.S. government is keeping an especially watchful eye during the trade war. There have been several cases of companies being fined for intentional mislabeling of Chinese goods as “Made in Vietnam”. Don’t attempt to avoid tariffs by mislabeling or buying from companies that you know are doing this.

Work with tariff dodging companies: There is an extensive network of brokers which work to avoid U.S. tariffs for their clients. Many openly state on their business websites that they can successfully perform illegal trade operations, such as obtaining fake origin certificates, to get around the Chinese import tariffs. In the late 1990’s, the U.S made a big effort to identify and get rid of brokers like these. Don’t let your business name be associated with these companies and practices if that happens again.

Transshipment Abuse: Transshipment is the practice of shipping goods through one or more countries, other than their country of origin, before they arrive at their destination. This is not illegal, and is an important part of worldwide trade. Components made in China may be shipped to Taiwan for assembly before the final product arrives in the U.S.

The illegal part would be if the exporting company attempted to hide the Chinese origin of the components, and instead claimed that the product was made from goods sourced in Taiwan. Goods are often considered to be from a country if they have been substantially transformed there. This practice is known as “origin engineering”. But what counts as substantially transformed is complicated from a tariff standpoint. This is for the CBSA to regulate, not the exporter.

Unfortunately, American importers may not know that the items they’ve ordered are originally from China. In an audit, you’ll be fined based on your attempts at following customs compliance practices. See our blog on doing your due diligence and do not intentionally buy from companies that engage in transshipment abuse to avoid being held accountable.

During the trade war, making changes to your manufacturing and importing is inevitable if you want to maintain or minimize costs. As with most things, knowing is half the battle. If you have any more questions about what you’ll need to do, contact us today. Clearit has a team of expert customs brokers who are ready to address all of your import and export needs.