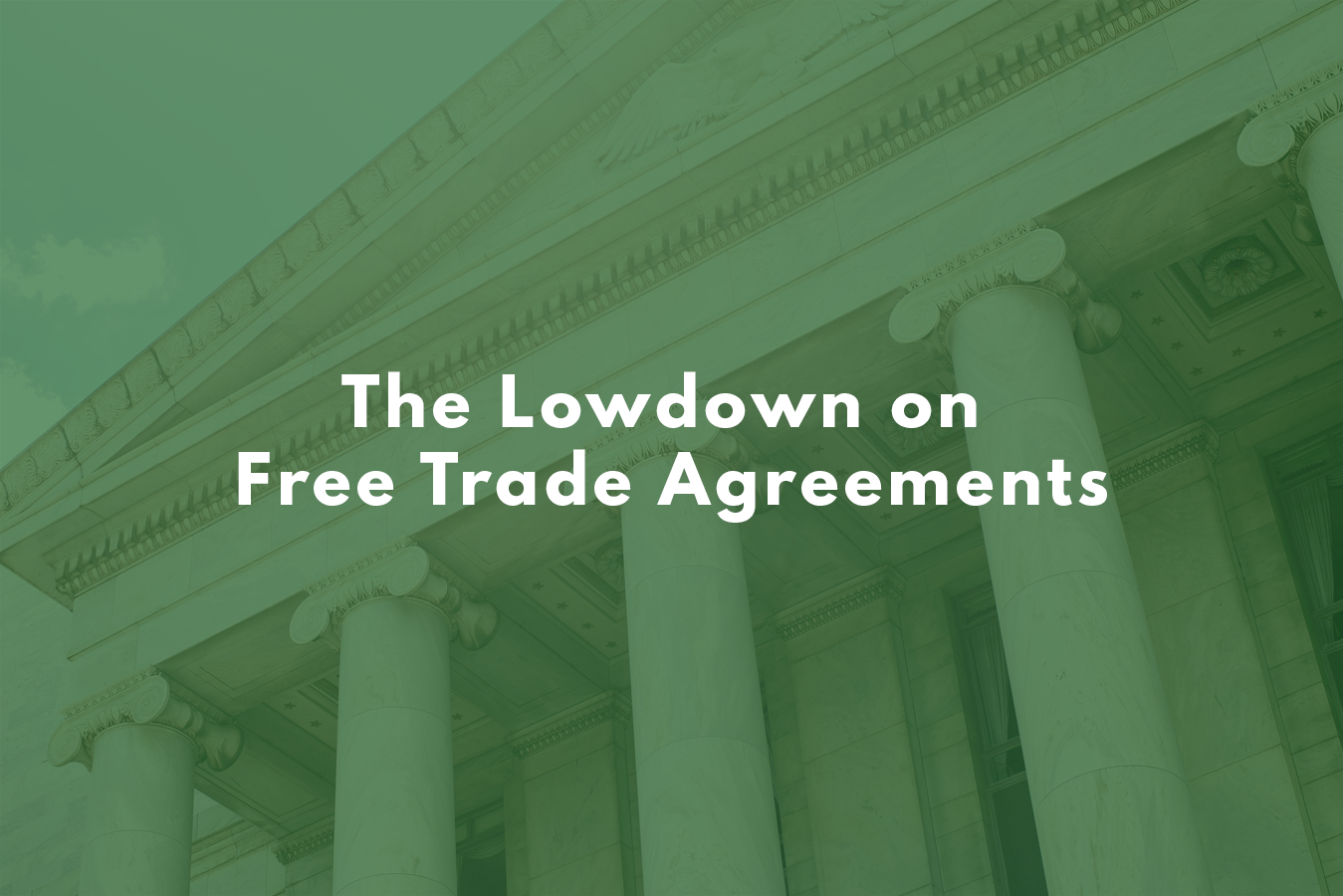 The Lowdown on Free Trade Agreements

Free trade has changed the world.

Post-WW2, America became a world leader in tearing down previous trade barriers and building new trade relationships. Even the European Union was born from a free trade agreement — the EU’s original incarnation was the European Coal and Steel Community, which was established in 1951.

As of writing, the United States is a member of 20 free trade agreements. American goods travel around the world — and international goods are made available for us at home — without costly barriers to trade, a boon for everyone.

The tricky part? Understanding all those different trade agreements. Bilateral, multilateral… there’s a lot to know!

Not every free trade agreement is the same. There is no standardized form to sign and say go — every agreement is approached from a different point, depending on the participating countries’ needs and desires.

Smaller economies sometimes prefer multilateral trade agreements. Because every signing member is treated the same, a smaller, emerging economy can benefit from the kinds of concessions that heavyweight economies can demand — like reduced tariffs on key exports — that they may not have had the bargaining leverage for in a bilateral trade agreement.

How do American Trade Agreements Work?

Overall, the United States is a member of more bilateral agreements than multilateral. Every trade agreement is a little different, but there is enough overlap that once you get to know how one or two work, you start to get a good idea of how the others might be set up.

The U.S-Korea Free Trade Agreement (KORUS FTA) came into force in March of 2012 and was renegotiated in 2018 to address concerns from both nations. Korea is one of our largest trading partners — they come in sixth — and has been a fair and favorable trading partner. Korea exports machinery, mineral fuels, and medical instruments to the United States; we export services and agricultural products to Korea.

Through KORUS FTA, 95% of all tariffs on goods between Korea and the United States are being phased out. To incentivize international business, new protections for multinational firms were written into the treaty. Under the renegotiated KORUS FTA, South Korea is exempt from the Trump administration steel tariffs and now is subject to a cap to steel exports.

As of time of writing, NAFTA is still in effect. Even after the yet-to-be-ratified USMCA is signed, NAFTA is an important deal to study if you want to understand how the United States approaches multilateral trade treaties. NAFTA came into force in 1994, though some tariffs were still in effect until 2008. In addition to slowly reducing tariffs, intellectual property right protections were increased.

NAFTA, like nearly all multilateral trade deals, contains provisions outside of tariffs and direct trade barriers to standardize the trading environment between member countries. These provisions are often more complex to negotiate and act on than ones in bilateral deals, so multilateral deal talks can take longer.

In particular, NAFTA lays out specifications for environmental protection — something that its successor, USMCA, has expanded on further. To facilitate transporting trade between the three countries, the CANAMEX corridor was developed. Currently, the corridor is a series of freeways and highways linking Canada and Mexico through the United States, but potential further plans for rail and fiber optic corridors have been proposed.

The more we trade with each other, the closer we all get — if you’ll allow us to be poetic for a moment!