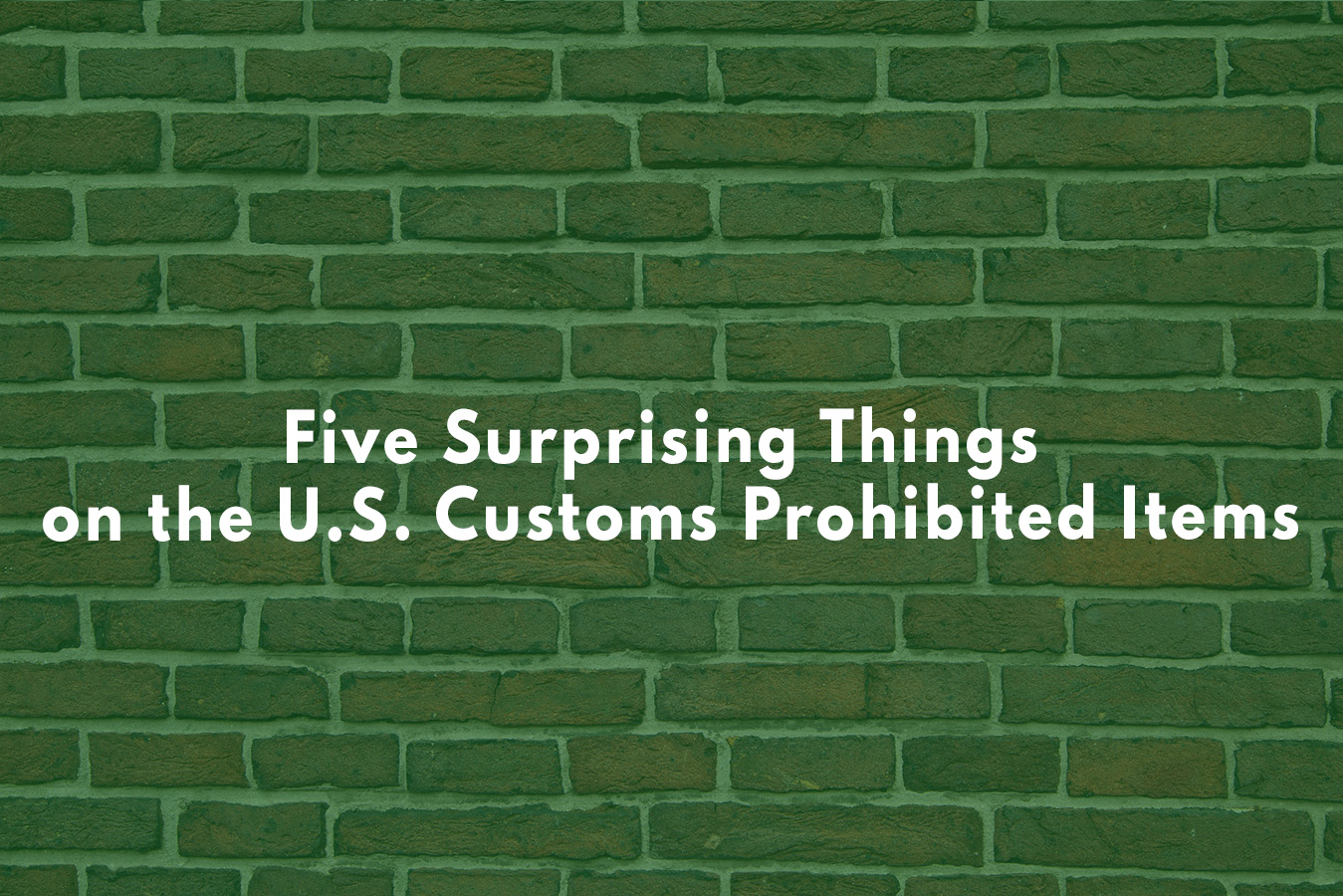 When you’re shopping online or planning to import a common household item into the United States, you probably aren’t wondering whether it’s banned or not. After all, companies like Amazon or Ebay regulate these things and U.S. citizens have a lot of freedom in what they’re allowed to import. If you’re trying to import something on your own, however, it’s possible that you won’t realize it’s on the U.S. Customs Prohibited Items list until your customs broker or the U.S. Customs and Border Protection (CBP) lets you know. The CBP has an online guide of U.S customs prohibited items that’s fairly easy to navigate. Many of the items you’ll find there are things you might expect, like drugs or exotic animals. But some of them are unexpected and might leave you asking “why would anyone want to import that in the first place?”. We’ve put together a short list of some of the most bizarre items that are banned from being imported into the United States.

It’s illegal to import or export anything containing dog or cat fur. While it may seem odd that anyone would want to import the fur of a common dog or cat, our fuzzy friends are sometimes used to make fur clothing in foreign countries. According to ActASIA and other animal welfare groups, those products have been passed off as the fur of more valuable animals and exported to other countries.

To protect the U.S. market from these products and support animal welfare initiatives, the Dog and Cat Protection Act of 2000 was introduced and their fur was placed on the U.S. customs prohibited items list. It calls for the seizure and forfeiture of items containing dog or cat fur, and fines for importing it can be as high as $10,000 USD! Woof!

Ah, the green fairy. Absinthe has a fabled history as one of the most intoxicating spirits known to man and has been further mystified by worldwide bans. However, absinthe is mostly misunderstood. It has been said to induce hallucinations mainly because of thujone, a compound found in wormwood. But most experts and studies agree that thujone isn’t going to cause hallucinations. If you’re feeling funny after having absinthe, it’s likely because you’ve had a lot of the deceptively concentrated alcohol.

Still, you can’t import any absinthe that is made with thujone. Additionally, the term “absinthe” can’t be in the brand name and the artwork on the label can’t depict images of hallucinogenic or mind-altering effects. Absinthe bottles that have those qualities are on the U.S. customs prohibited items list. This has led people to believe that the absinthe you can bring into the U.S. isn’t “real” absinthe, but the absence of thujone really doesn’t change the flavour or how intoxicating the spirit is. If you do bring some absinthe home that contains thujone, you’ll likely have it seized at the border.

Products made from sea turtles

Most people can rightly assume that exotic animals or products made from them are going to be on the U.S. customs prohibited items list. But many travellers don’t realize that these products are a lot more common than they might think. According to recent studies, tortoiseshell jewelry is found in many tourist shops across Latin America and the tortoiseshell trade is alive and well.

Under the Convention on International Trade in Endangered Species of Wild Fauna and Flora (CITES), the U.S. regulates against the international trade to prevent the decline of threatened species. Under CITES Appendix I, the hawksbill sea turtle has been listed since 1975, and as a result, all commercial trade in the species has been prohibited since that date. The U.S. bans the import of tortoiseshell made from all other species of sea turtle as well.

Have you ever been abroad and noticed that the cheese outside of the U.S. taste different? That’s because many foreign countries use unpasteurized (raw) dairy to make cheese. In America, all cheese regulated by the FDA must either be made from pasteurized milk or aged at least 60 days. It’s been this way since 1949.

If you’re a big fan of traditional European cheeses made with raw milk, like Brie and Camembert, you may be tempted to bring some back from your travels. You might even be tempted to head over to Canada for some unpasteurized milk cheese to take back home. Unfortunately, you won’t be able to. Because of the ban on these products, the cheese will be seized by the CBP. You’ll have to fill up on that soft, gooey Valençay while you’re away.

Many agricultural products from foreign countries are on the U.S. customs prohibited items list for all kinds of reasons – trade agreements, fear of disease, and often pests. Rice imports from a huge band of countries all along the Tropic of Cancer, from Morocco all the way to Bangladesh, are at risk of carrying the Khapra beetle, an invasive bug that eats grain and is considered one of the 100 worst invasive species in the world.

There is a hard ban on personal imports of rice from these countries. You might still find rice from these countries at your local grocery store, but those imports have been carefully regulated and inspected under the United States Department of Agriculture. Even if you’re bringing rice into the U.S from a country considered safe, the CBP discourages it. Rice in packaging that appears unsafe or contaminated may be refused entry.

You may already know about this last item on our list of surprising U.S. customs prohibited items. Kinder eggs are certainly one of the more infamous things banned in the U.S. and the ban on Kinder Surprise eggs frequently creates buzz on social media, often being compared to more controversial items which are not banned. The small chocolate eggs with an even smaller toy inside are banned in the U.S. under the Federal Food, Drug, and Cosmetic Act. Under this act, the sale of any candy that has a toy or trinket embedded in it is prohibited for fear that the toys could be a choking hazard.

For many years, the only way for U.S. citizens to get their hands on a Kinder Egg was to sneak it over the border. In 2017, the Italian candy maker Ferrero started selling an alternative in the United States called Kinder joy. This version is FDA compliant and has a toy contained in a separate compartment than the chocolate.

Still, some people just can’t resist the original Kinder Egg product and try to sneak it in anyway. If you get caught doing this, you’ll have the candy seized from you. It’s also possible that you’ll receive a fine. Allegedly, between 30,000 and 60,000 Kinder eggs are seized each year by CBP agents. What do you think they do with all that chocolate?