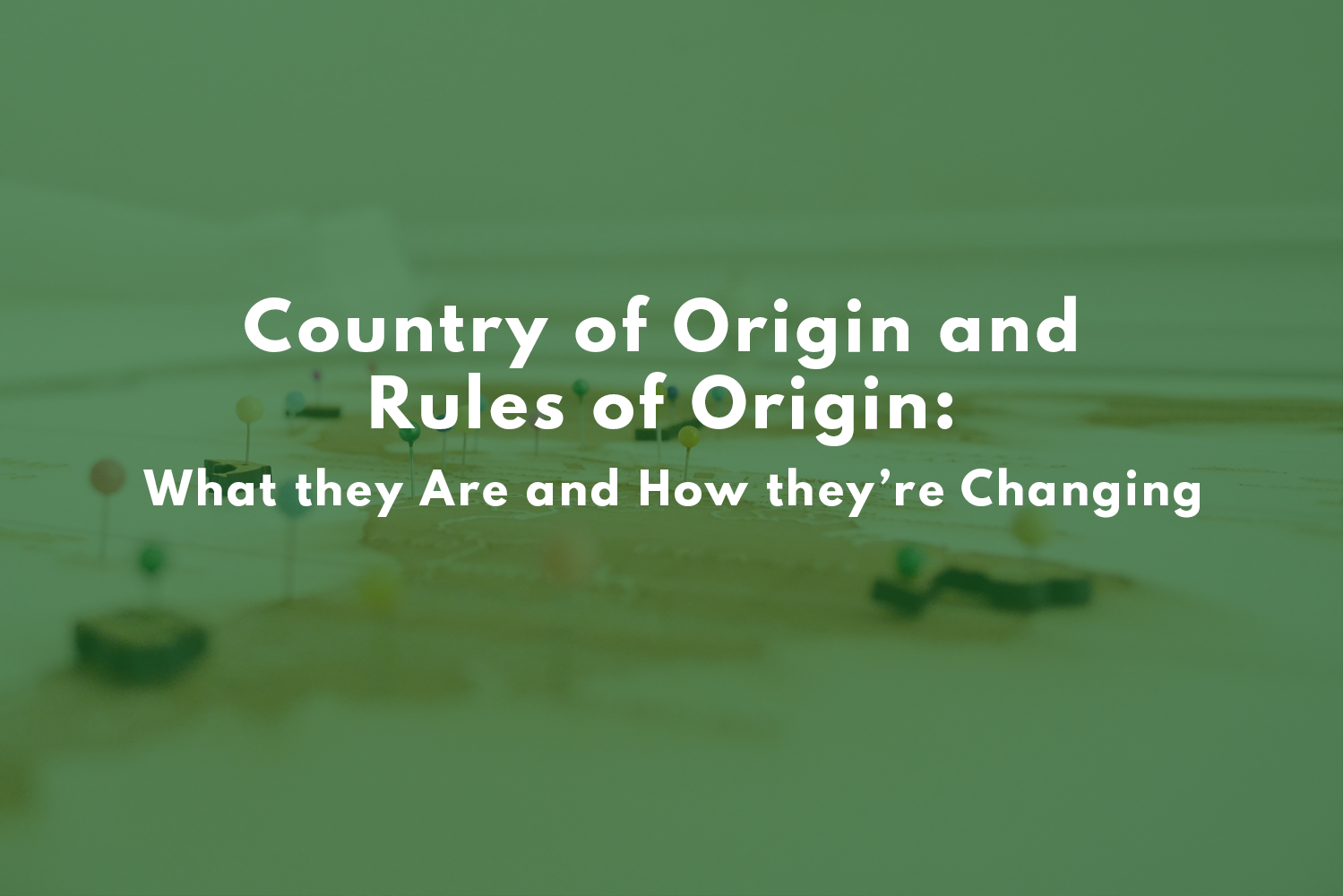 Country of Origin and Rules of Origin: What they Are and How they’re Changing

When it comes to importing, there are dozens of things that need to be considered, like documentation, tariff codes, and tax exemptions — to name a few. But there are two aspects in particular that are often considered a top priority: the country of origin and the rules of origin.

In the past month since President Donald Trump announced the newest trade agreement between U.S., Mexico and Canada (USMCA), there have been announcements of major changes to both the rules guiding the country of origin and the rules of origin regulations.

But before we explore how they have been impacted by USMCA, let’s explain why both of the origins plays an important role in importing goods.

They might sound similar, but country of origin and rules of origin are governed by separate and distinct policies.

Country of origin: Also known as “place-based branding,” the country of origin (COO) is a necessary distinction labelled on goods and products being imported from specific place. A product being imported from Japan must clearly mark its origin in an effort to inform the “ultimate purchaser,” i.e. final consumer. It is, in effect, the country of manufacture, production, or growth, where an article or product comes from.

Rules of origin: The rules of origin are frequently looked at during free-trade negotiations. Basically, they’re for determining the country source of a product or service destined for export. They carry a complex set of rules because there is no clear definition — it’s always open to interpretation. Depending on certain free-trade agreements, a product could receive duties or restrictions.

It is crucial to establish how much of a product is actually made in the country they claim in an increasingly globalized world where manufacturers are using parts from around the world. This is essential when importers and exporters are determining whether a product gets tax compensation or if it becomes a restricted item.

What happens with USMCA?

The 24-year-old North American Free Trade Agreement is no more. A month ago, we ushered in the era of USMCA. Although it will take a more time to ratify all of the provisions, it seems that each country involved has reached a peaceful and fruitful agreement, and there are some changes that will need to be followed.

The new free trade agreement will have a direct impact on farmers in the U.S. According to American Agriculturist, farmers and ranchers will have more export market certainty and stronger bonds with both Canada and Mexico.

This will strengthen relationships with farmers from each nation because they have been granted greater access to the market share. Among the many provisions, Canada’s Class 7 milk pricing program has been eliminated; U.S. dairy will have more access to Canadian markets.  In addition, U.S. wheat growers will have more access to Canadian markets, and there are new agreements on agricultural science based trading standards.

The auto industry gets a facelift

USMCA will also impact car manufacturing in Canada, which has a ripple effect for anyone involved in importing in the auto industry. While the rules of origin are left up for interpretation, it became a major talking point during the negotiations. Canadian auto manufacturers will need to make sure that the parts they purchase meet new and complex requirements. If Canadian auto manufacturers want to take advantage of the duty free treatment, they’ll need to meet a new standard of “originating.”

The bottom line is that Canadian auto manufacturers that wish to export to America will need to meet a certain percentage of North American content in their passenger vehicles, light trucks, and trucks, and the percentage will increase over a designated period of time. If they fail to do so, they will not receive specialized duty free treatment in America.

The new provisions may seem daunting, but we’re excited to offer our expertise in order to help you better understand the new USMCA. There’s no better way to prepare than by contacting a customs broker.