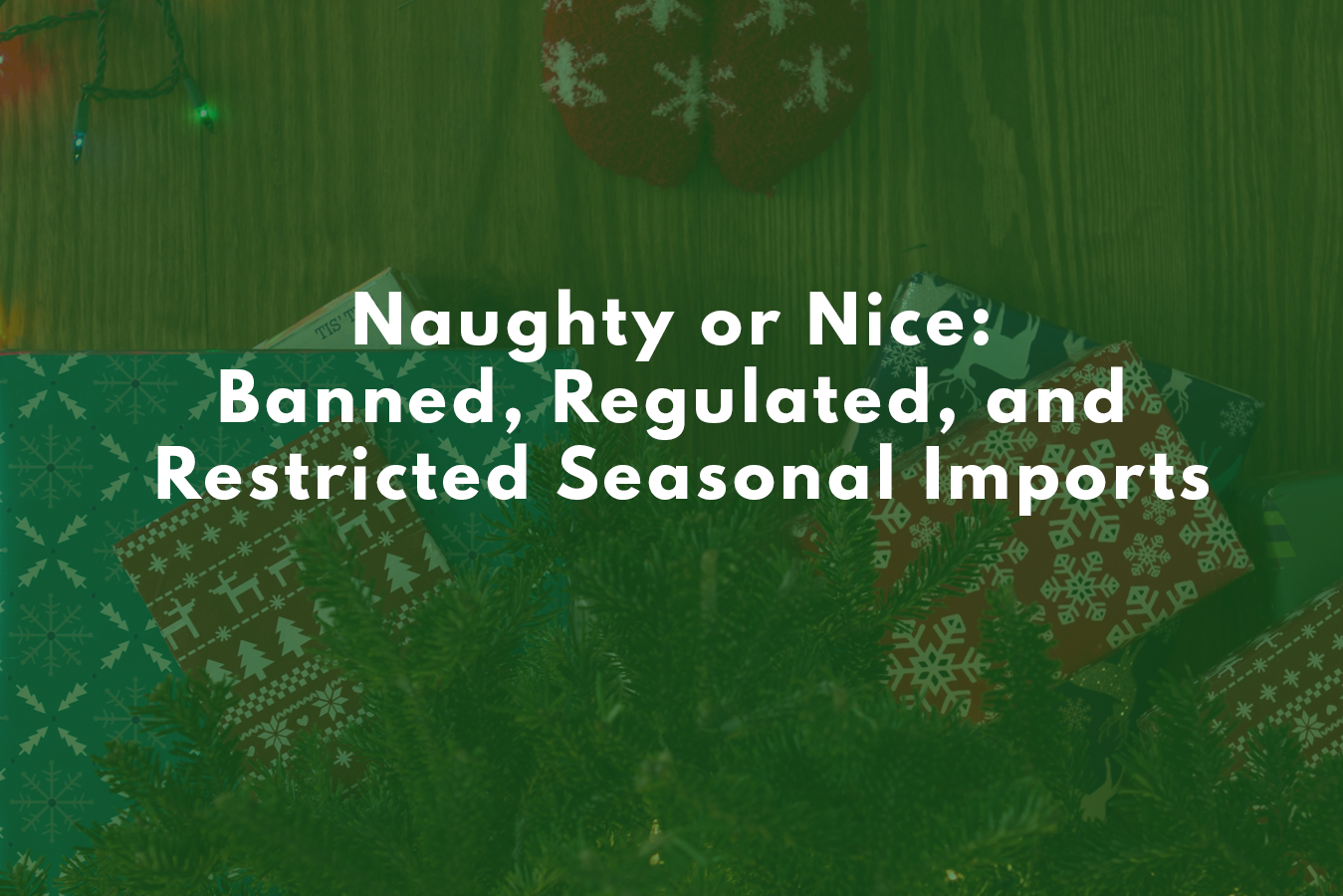 ‘Twas the night before Christmas and people all across the United States were still stirring — several hundred decibels louder than a mouse — to get all of their traditional holiday goods across the U.S. border in time for Christmas Day and New Year’s Day.

Though we’re already well into the thick of the holiday season, many importers throughout the month of December have been in a not-so-jolly mood. Long lineups at customs notwithstanding, many have faced challenges getting certain items cleared for the season’s usual round of family dinners, office parties and New Year’s celebrations.

Whether you’re still working diligently like an elf, or you’re ready to take some lessons from this year into future holidays, we’ve done like Santa Claus and put together our own naughty list of banned, regulated and restricted items you’ll be interested to know about.

It’s not completely unusual that there are heavy restrictions on any citrus fruits (oranges, grapefruits, lemons, limes, etc.) that enter the country from Canada, as per U.S. Customs and Border Protection (CBP), unless you have a proof of origin handy for clearance.

This year, however, border agents at points of entry in Minnesota have been clamping down on Canadians coming into the U.S. with mandarin oranges (a holiday classic) and other varieties, telling them to leave anything citrus-related at home.

According to CBP, despite the influx of “Christmas oranges” this time of year, citrus fruit is not permitted to cross due to its risk of being infected with — among other things — citrus cankers, citrus black spot and sweet orange scab, all of which are highly contagious.

Strangely enough, even mandarin oranges and other citrus products that were grown in the U.S. but exported to Canada aren’t allowed back in.

So, if you’re hosting guests from north of the border and they happening to have a particular hankering for mandarin oranges, you’ll just have to advise them to wait until they get to town.

Though many opt for real Christmas trees and the scent of fresh fir wafting through their home, the number of people buying artificial trees has risen significantly in the last decade. So much so that, on average, nearly $80 million worth are imported to the United States each year.

CBP maintains tight regulations on artificial trees, much like the real ones. However, rather than normally being tested for pests and diseases, — with the exception of imports from China quarantined in 2004 that had a wooden base — artificial trees undergo fireproof testing.

Anything taller than 30 inches is considered a potential fire hazard, plus checks are conducted for faulty wiring (electrical issues are the most common firestarter), polyvinyl chloride levels (PVC carries dioxins, which are a known health risk to humans), and lead levels.

Grandma’s cookie recipe probably isn’t a usual cause for concern, but depending on what’s in it, CBP might raise some flags before letting it go across the U.S. border.

Generally speaking, most baked goods aren’t a problem — however, anything containing fruits or vegetables (fruit-filled pies, granola bars with fruit pieces, carrot cake, etc.) should be brought to the attention of your planned point of entry before you show up and leave disappointed.

Apart from sweet treats fresh from the oven, any other type of candy, chocolate, or cured cheese won’t undergo rigorous inspection, nor will canned goods or those in vacuum-sealed jars if intended for personal use only.

Even though eating pudding at Christmastime isn’t really an American tradition, for plenty of families descended from Great Britain, Ireland, and other former British colonies, it very much remains a holiday dessert staple.

If you’re buying one online or having a member of the family bring it over from the old country, be advised that it might not make it across. Any type of pudding — Christmas, holiday, plum, Yorkshire, or otherwise — is prohibited if discovered to be made with animal fat or suet (a type of beef or mutton fat similar to lard that’s common to British cooking). Only puddings made with non-animal fats are permissible.

Regardless, you will need to notify visitors to declare any puddings at a port of entry to undergo inspection before they can be cleared.We’re excited to work with all of you again next year, so from all of us here at Clearit USA, we’d like to wish you the happiest of holidays and a wonderful New Year. Talk to you in 2019!